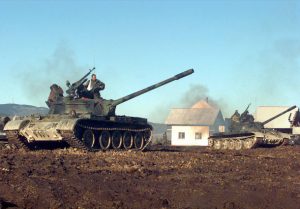 Two Croatian Defense Council (HVO) Army T-55 Main Battle Tanks pull into firing position during a three day exercise held at the Barbara Range in Glamoc, Bosnia and Herzegovina. The HVO Army was granted the use of the range for first time in 18 months to train their troops on the proper use of the tank, its 100mm main gun and 12.7mm machine gun.