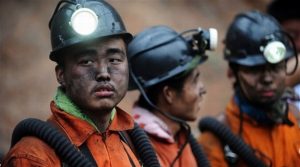 A team of more than 100 Chinese rescue workers search for survivors after an explosion at a coal mine in Xiaoyi city, northern China’s Shanxi province on June 13, 2008, as thirty-four miners remain trapped underground. Nearly 3,800 lives were lost in Chinese coal mines in 2007, down 20 percent from the year before, according to official figures, however, many independent labour groups suspect the actual death toll is much higher, saying many accidents are covered up to prevent costly shutdowns and legal action. CHINA OUT GETTY OUT AFP PHOTO