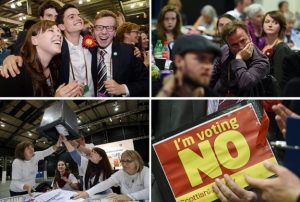 epa04406824 No supporters celebrate their win over the Yes campaign at the Royal Highland centre during the Scottish referendum in Edinburgh, Scotland, 19 September 2014. Reports state that enough votes against Scottish independence have been counted to ensure victory for the Stay Together Campaign in the referendum, according to election officials. EPA/ANDY RAIN