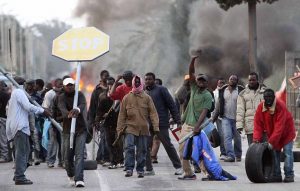 epa01983584 A group of immigrants living in Rosarno, take part in a protest demonstration in Rosarno, Italy, on 08 January 2010. Thousands of immigrants protested against racism in the southern Italian town of Rosarno after a night of rioting that was sparked by an attack on African farm workers by a gang of white youths. EPA/FRANCO CUFARI