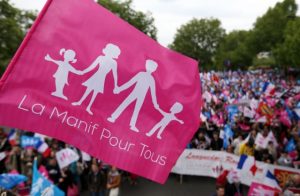 A flag of the anti-gay marriage movement “La Manif Pour Tous” (Demonstration for all) is seen on the foreground while people demonstrate during a mass protest on May 26, 2013, in Paris against a gay marriage law. France on May 18 became the 14th country to legalise same-sex marriage after President Francois Hollande signed the measure into law following months of bitter debate and demonstrations. PLacard at centre reads “Same-sex marriage, no”. AFP PHOTO THOMAS SAMSON